When did placemaking become a private business matter?

For whom and for what reasons do we make ‘places’? Could a more inclusive approach to placemaking improve social connections and opportunities? Placemaking. The term conjures scenes of clever murals on construction site hoardings, of alfresco fitness classes, of planter boxes and shopping bags, of wholesome parties in temporarily car-free streets, of attractive couples in well-groomed parks. It is often found in the company of words such as ‘vibrant’, ‘activation’, ‘unique’ and ‘community’. The Project for Public Spaces, a prominent international advocate for the value of placemaking, has expressed concern about the term’s proliferation and potential devaluation:

A great public space cannot be measured by its physical attributes alone; it must also serve people as a vital community resource in which function always trumps form. When people of all ages, abilities, and socio-economic backgrounds can not only access and enjoy a place, but also play a key role in its identity, creation, and maintenance, that is when we see genuine placemaking in action.

Singapore excels at city-making on a grand scale; just think of the Marina Bay skyline. Does it also have the will, skill and systems in place to retrofit existing urban neighbourhoods with more modest, everyday places that offer the qualities of accessibility, activity, comfort and sociability for people from all walks of life?

The will and skill are readily apparent. The Urban Redevelopment Authority (URA) has promoted a slew of placemaking initiatives, including Car-Free Zones, regular road closures supported by local businesses, and the Lively Places Fund, organised jointly with the Housing and Development Board to “encourage residents and stakeholders to initiate community-driven placemaking projects that will help develop stronger place identity in their neighbourhood.”

Smart designers know that the experiential aspect of place matters: not just what it looks like, but what it feels like, in the hand and underfoot.

Placemaking expertise has expanded among local built environment consultants, through the trial and error of experience, alongside knowledge exchange with international peers. Passionate advocates and designers have shown the value of Singapore’s heritage buildings, including the essential role of the small entrepreneurs and long-time dwellers that give them life. From roadside community gardens to void deck paintings, the latent creative potential of individuals and civil society groups is evident.

Singapore is currently in the midst of an important new placemaking experiment – one that brings private-sector actors into the process in a major way. Launched in 2017, the URA’s pilot Business Improvement District (BID) program, modelled on precedents from North America, the UK and beyond, provides a new way for private sector ‘stakeholders’ – in this case mostly large property owners – to “take on a more active role in transforming their precincts and activate the surrounding public spaces.” The URA is providing ten new precincts with matched funding to deliver targets proposed by the dues-paying stakeholders, ranging from pop-up stalls to way finding improvements, from arts trails to joint marketing platforms.

Partly thanks to the URA’s active efforts to facilitate best practice sharing, private-sector landlords reportedly have an enhanced sense of the value that placemaking can offer, as evidenced by their participation in this new scheme, which involves a real commitment of funds. However some people I’ve spoken with feel that demand for quantifiable commercial return on investment still outstrips that for ‘softer’ social benefits. After all, the primary indicator of success for a mall owner is that shoppers buy more. The primary indicator of success for an office building owner is that tenants pay higher rents.

One public space deploys art to celebrate images of ‘diversity’ and ‘community’, while functionally inhibiting the actual expression of these concepts.

The best of Singapore’s malls provide ample free seating, and even some cultural programming. Yet I still see too many instances of well-intentioned ‘activations’ that seem ‘curated’ with more thought toward how they look than what functional needs they might serve. For example, an eye-catching cardboard reproduction of one of Singapore’s heritage dragon climbing structures attracting a stream of eager children; but scrambling after them, caregivers who had spotted the sign warning: “DO NOT CLIMB. THIS IS A PLAYGROUND SIMULATION ONLY.” What lasting value does this create? What are places like this made for?

Singapore has invested significantly in formal cultural infrastructure, funding breathtaking museums with excellent restaurants and courteous docents. Walking with visitors to one of my favourite galleries here, I always point out something: on either side of the footpath are a few public benches interspersed with similarly shaped public artworks, the latter bordered by metal cables that give an overall effect of “KEEP OFF”. Sites of elite leisure surround this area, but it is also a popular gathering place for foreign labourers. On any given Sunday or public holiday, hard-working men and women convene here, greet friends, and share potluck picnics on the cramped strip of ground behind the decorated structures, which remain largely empty. This public space deploys art to celebrate images of ‘diversity’ and ‘community’, while functionally inhibiting the actual expression of these concepts. For whom are places like this made?

Smart designers know that the experiential aspect of place matters: not just what it looks like, but what it feels like, in the hand and underfoot. They know that this experience has to be evaluated from the perspective of diverse personas.

If simulation playgrounds are not made for children to play on, then for whom and why are they made at all?

Most of the recent and proposed private-sector-led placemaking serves me well enough. I would happily tap on my laptop in a new sidewalk chair, try an after-work bootcamp on my office plaza, explore a new heritage trail. But I wonder who will make room, and program activities in these places, to serve the many other people upon whose contribution the life of the city depends? For the exhausted-looking women and men who keep my office building immaculate; for the guys who deliver our parcels; for the stooped aunties clearing trays at the hawker centre; for the security guards on night shift? Which stakeholders will advocate for their wants and needs? 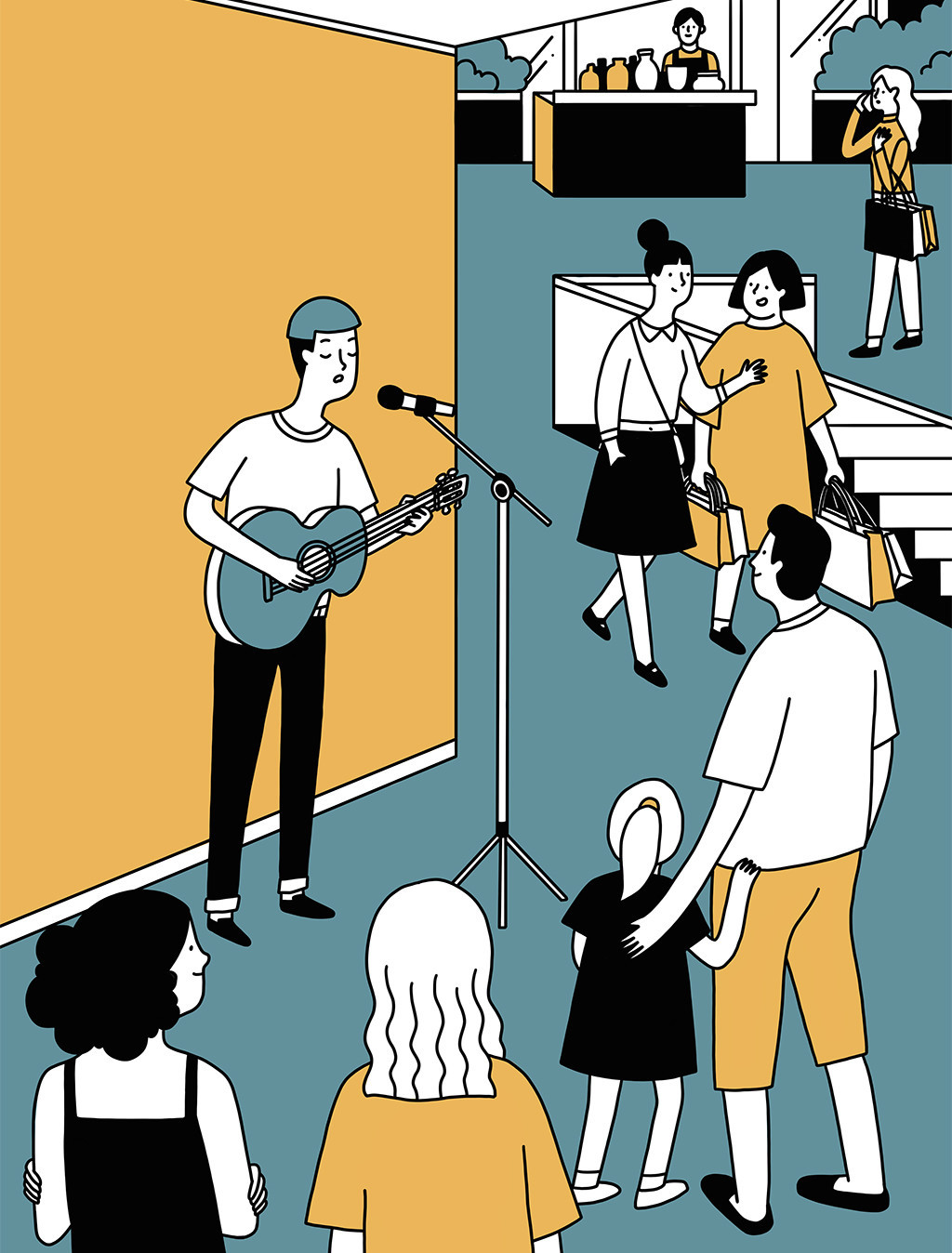 Our environments can be designed and programmed to exclude or signal belonging; to hide ‘undesirables’ or enable interactions of dignity. As the work of Teo You Yenn and others has brought into common discussion, Singapore’s levels of inequality are high by global metrics. How could practices of placemaking, not just in the heartland, but also in the midst of gleaming central districts, be part of the solution? It’s promising that some of the BIDs have set out to enhance the physical connectivity and legibility of their spaces, targeting public transport access and way-finding as priorities. How could such improvement of physical connections also actively target the improvement of social connections and opportunities?

On the other hand, as one stakeholder pointed out to me, the dominant placemaking emphasis on programming spaces for ‘activation’ and ‘vibrancy’ may come at the expense of the qualities of calm, respite and contemplation. Where is the line between designing spaces that stimulate us and encourage ‘engagement’ and spaces that deplete our precious energy and attention? The former align most closely with increased footfall and higher sales; the latter with less tangible financial ROI, but arguably higher social benefit within a culture of overwork and digital distraction.

Where is the line between designing spaces that stimulate us and encourage ‘engagement’ and spaces that deplete our precious energy and attention?

To ask an even harder question: how should ‘business’ improvement districts be evolving themselves when business as usual is so clearly failing on a global scale? In this time of climate crisis and mass species extinction, driven by the pursuit of economic growth at all costs, which stakeholders will be advocating for placemaking to play a role in dramatically decreasing our appetite for consumption and opening our eyes to new ways of inhabiting the shared spaces of the city?

What processes might ensure that this next phase of private-sector-led placemaking aims for and achieves more than simply place branding, marketing and management? In a speech last year, Deputy Prime Minister Heng Swee Keat praised the work of local practitioners Participate in Design, whose mantra is “designing with people, not just for people.” Following this logic in the case of BIDs, one way to expand the imagined audiences and uses for the places being ‘made’ could be to expand the membership of those with the power to determine targets and monitor progress towards them.

At time of writing, only two of Singapore’s ten pilot BIDs list non-commercial entities as “community partners”. My own, largely positive experiences of working with BIDs in the UK convinced me that the model is the most successful when its stakeholders are as diverse as possible; including not just commercial and public sector representatives, but also a wide range of civil society players, from cultural and educational institutions to social welfare organisations, often represented at governance level.

This approach helped to expand and sustain the ambitions for who placemaking efforts were in service of, beyond the tenants and customers of large landlords. What does this look like on the ground? In one instance among many, a BID-funded permanent transformation of a formerly derelict back alley in a busy part of central London. A local architectural charity wrote the brief and managed a small competition to ensure design quality, while the landscape was planted and maintained by another local charity that created pathways to meaningful work for formerly homeless people. Reinvented as a well loved green oasis, it now offers free seating, a small community library, and a collection of plants donated by local residents.

For what and for whom will BIDs – and other private sector-led initiatives in the public realm – make space? In the end, it may be a question of priorities: do we intend our central districts to be put in the service of improving business, or shall the businesses’ be in service of improving their districts, and the life of the city beyond?

Thanks to all the individuals who agreed to share their insights and perspectives on placemaking in Singapore with Sarah during her research and writing of this provocative thoughtpiece, originally published by Indesign Media Asia Pacific in CUBES 99.